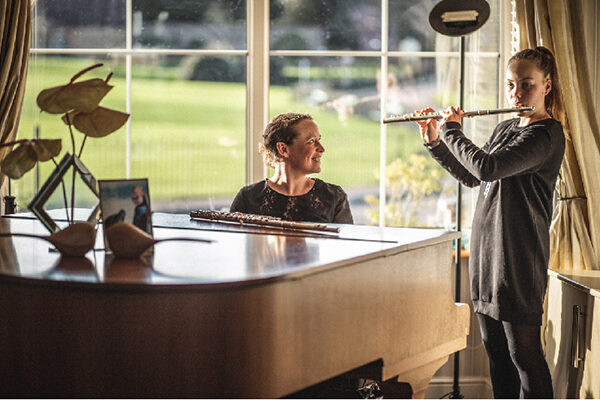 You hear your name being called. You stand up, make your way to the front of the darkened room, carefully climbing the five steps up to the stage. Your hands are shaking, but you close your eyes, take a deep breath and begin.

I had my first piano recital when I was 14 years old. I was performing an ABBA classic, Money, Money, Money, at our school Christmas concert. I absolutely loved it and music was something I continued with in school until I was 18.

I first started learning to play the keyboard when I was ten years old. I had many different music teachers through the years, but my lessons were always through school and were either fully or partially subsidised. The fact that the lessons were subsidised by the school was the main reason I was able to keep having them.

Many musical instrument teachers are self-employed. Often, they liaise with local authorities to get contracts in primary and secondary schools. But government cutbacks over the last ten years have had a serious impact on music teachers – and this has been exacerbated by the changes to the off-payroll tax (IR35) rules.

By the summer of 2019, guitar teacher Patrick Avery is set to lose 40 per cent of his work. The 35-year-old, who teaches in schools in Slough and Windsor, says: “Government cutbacks have had a massive impact on local authorities and obviously this has had an effect on music teachers. This is a big issue right now.

“I used to get work through a private agency when I first started out about three years after I left college. At first, the pay was pretty good, but it never increased. When the music service agency folded, I took all that work on a self-employed basis.”

Patrick, who has been teaching for 14 years now, explains that he initially was part-employed and part-self-employed. Over the years, however, he has taken on more and more work on a self-employed basis.

The London-based musician went on to add: “Some schools I teach at, the instrumental lessons are fully subsidised because it is in a deprived socio-economic area. Students here are on a pupil premium, so the government pays money for them to have the same experiences as other children.

“But this had got much less over the years. In fact, one school I am working at has slashed their budgets massively, which means I will lose 20 per cent of my work as of Easter. It is simply because they cannot afford to pay for the lessons and when they are trying to find ways to save money, music lessons are often one of the first things to go.

“Added to that, I have a lot of students who are doing their GCSEs, and you do see a big dropoff around May and June. So come summer, I could be down by 40 per cent.”

The continuous squeeze on local authority budgets and its impact on council-run music services is something Sarah Tomlinson has also seen first-hand.

The 39-year-old woodwind teacher told Freelance Corner: “I always knew I wanted to be a music teacher, so after I completed my music degree and PGCE, I went back to the music service in Milton Keynes and got a job there.

“I was employed by the council and honestly didn’t struggle at all to begin with,” Sarah admits. “I was able to develop my skills and there was a good career progression. Everything was great until about ten years ago, when the financial crash happened.”

Sarah, who has now been teaching for 18 years, says after the crash it wasn’t just a lack of funding for schools to subsidise lessons, but parents being able to afford tuition for their children. And then four years ago, Sarah, along with around 80 others who worked for the music service, were made redundant by the council.

“The council still wanted a music service,” she says, “so that was when we formed the co-operative and became self-employed. It is run by the members and means we can collaborate, set base rates so we are not undercutting each other and seek help and guidance on issues such as IR35.”

In England and Wales, many music teachers have come together to set up co-operatives in their local areas. These independent hubs are sponsored by the Musicians’ Union and they are there to bring teachers together to share ideas and best practice.

The union offers resources and training, shares research and advocates the benefits of a musical education. It also campaigns and offers guidance to teachers – particularly those who are new to self-employment – on everything from setting up and tax returns to, more recently, navigating IR35.

The on and off-payroll tax rules have had a significant impact, David Barnard, education official at the Musician’s Union tells me.

“IR35 has challenged that modus operandi,” he says. “There are a lot of music hubs operated by self-employed teachers, but under the control of the local council. In those cases, many teachers have had their employment status brought into question.

“We’ve had individual teachers who have been working in schools that have received instructions from the local council saying that all off-payroll contractors should now be on PAYE. Many schools, fearful of the fine, attempted to put music teachers on the payroll.

“We’ve had to remind them that they are genuinely self-employed,” David explains. “In many of these cases the teachers will bill their pupils’ parents, pay for their accommodation, have their own curriculum and are able to provide a substitute – all the tests HMRC use to determine status. We’ve had quite a few of those and have been able to win some of these cases.

“In one county, the local council has done an IR35 audit and said all music teachers are inside and need to be put onto the payroll. However, if that happens the music service would collapse, because they simply would not be able to fund it – so we are looking and trying to resolve this problem at the minute.”

In other cases where local authorities have made blanket decisions, music teachers, particularly those who have contracts with schools, have found themselves out of work. This is primarily because many cannot afford to put the teachers on PAYE.

“When the changes to IR35 expand into the private sector, there is a chance we may be seeing more problems starting to arise. And teachers need to share any challenges they face as a result.

“Many like to stay under the radar. We hear people talking about the NHS or the police, and people still don’t realise what and how much that comes under the jurisdiction of the local authority.”

Andrew Chamberlain, deputy director of policy at IPSE, said: “Like so many others, music teachers have been severely affected by the changes to IR35 in the public sector. Self-employed music teachers are a vital part of our education system and more must be done to ensure children of all backgrounds have the opportunity to learn an instrument.

“The public sector is just a fraction of the size of the private sector and if these changes go ahead in 2020, the consequences will be far worse. The government must take heed and reverse these disastrous changes for the good of UK businesses and the economy.”